Distillation is a thermic separation technique − the aim of distilling is to separate two substances with different boiling points. In a distillery, the goal is to separate the alcohol created by fermentation, and to concentrate it. For Example, a fermented wash of 10% ABV is distilled to achieve a concentrated spirit of high ABV. 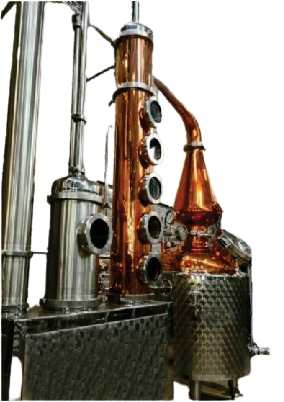 When distilling, there are 2 types of stills we provide. A pot still, and a column still. A pot still is used to distill liquors while carrying over as much flavour from the wash as possible, while the achieved ABV won’t be as high . This is suitable for liquors such as Whisky and Rum. A column still equipped with a reflux condenser is used to achieve high proof neutral spirit such as vodka, carrying over no flavour. We also provide a hybrid option of a pot still is connected adjacent to the distillation column.

Reflux condensers sits on the head of the column, condensing the vapor leaving the column. This is done to condense the water vapour which has a higher boiling point. Thus resulting in an improved alcohol concentration.

The vapor containing alcohol is the cooled and condensed. The heating can done by steam jackets (where water is heated by an external boiler and the steam flowing inside the walls of tank heats the wash) or with an electrical heating element. To evenly heat your wash, we also can offer an agitator which is equipped with a low−speed gear motor. In combination with a three − bladed paddle, this ensures intense rotation.

Also available is CIP cleaning system to make sure that every component of your distillation system is completely clear before the next use.